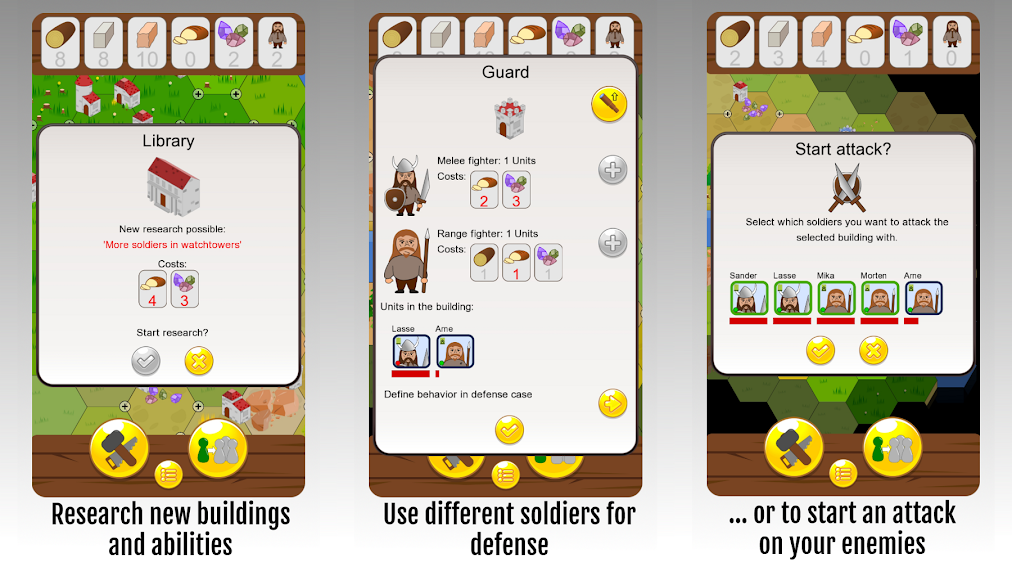 Build your own settlement in a turn-based strategy game and fight against your opponents.

Lehnsherr is free to download and install. There are no IAP.

A network connection is not required for singleplayer or local multiplayer mode.

Cross-platform PvP! Play 1v1 multiplayer battles between Windows and Android devices.
Up to 4 player local multiplayer on one device.

Fight other players and prove your skills in local or online multiplayer mode.

Description
In Lehnsherr you create your own viking village in a turn-based strategy game. You have to keep an eye on your resources as well as on your opponents.

At the beginning you have to get the desired resources as fast as possible. Because your vikings are not alone. Depending on the level, there are several enemies who claim this area just like you do. Therefore decide which of your watchtowers should be equipped with soldiers. These are necessary to defend your area or to attack your opponent and weaken him sensitively.

But your opponents are not the only problem, you also have to cope with strokes of fate like floods or famines.

New buildings and military abilities can also be researched in the town library.

In the brand new "Ancestor Stone" mode, 7 Ancestor Stones are scattered on each map. The goal of the game mode is to occupy 5 stones.

A stone is considered occupied if you manage to build a military building on the stone without your opponent having one there.
If more than one player has a building there, it is considered unoccupied and you have to fight for the stone.